Out of Berlin, Germany comes a trio called Skalar. They are “residents” of “Lillipoppe Shop” records, and during   the period of existence, and this is about 6 years, after realization of  one  EP, a group has recorded debut full-length with 9 tracks in, entitled “Spooky”. 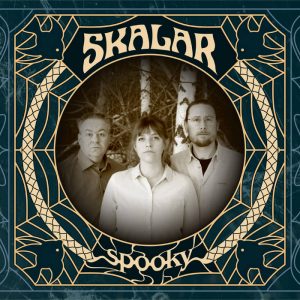 The group works in trio formation, which consists of  one female and two mails : Anne Smidt – vocals, guitar, keyboards;
Sebastian Birk – bass, vocals, keyboards; Groucho Kangaroo – drums, percussion. The songs from the album were also  done in collaboration with a team of friends-collaborators, who contributed to the present material sounding the way it was intended. The musical solutions presented here are  combination of folk, folk-rock, Americana and psychedelic elements.

The songs were done in mid to mid-up tempo, with untypical atmosphere, judging to nowadays standards, where often hidden psychedelic elements dominate the structure of the songs themselves. The offered materials confirms the originality of the German band, whose songs deserve repeatable listener’s attention.