For the well-known jazz followers, there’s no need to specially introduce lady with flute – Mrs. Andrea Brachfeld. Her name and legacy in the world of jazz are respectable, and her long career and years of existence relevantly confirms her status. 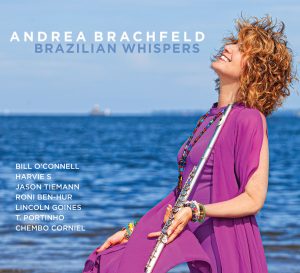 Her rich discography started  out in the late 70’s, and many of her albums deserved respect and critically relevant confirmations.
Her still actual release- “Brazilian Whispers”. with 11 tracks in, done with longer time collaborators and friends: Bill O’ Connell, Harvie S, Jason Tiemann, as the title announced, is dedicate to Brazilian music  and Antonio Carlos Jobim legacy. So , we can find here and there pleasant musical vibration, also peaceful mood and same atmosphere as well. Nice arrangements creations, vibrant flute sound of   Mrs. Branchfeld,  has dominated through complete presented instrumentally done themes. I would also add, that complete mentioned atmosphere knows to remind  on the periods of 60’s and 70’s era,  and the imaginary pictures of Brazil are all the time around your eyes, ears and soul. That’s also unusual jazz release, but with many positive music associations and emotions too. Very recommendable, not only for the followers of her previous works.