Hazemaze are Stockholm, Sweden doomsters , whose activities dated from 2016 year. Their discography started out in 2017 year, and in the fields where doom/stoner as a genres are important forms,  Swedish trio has received a relevant status. 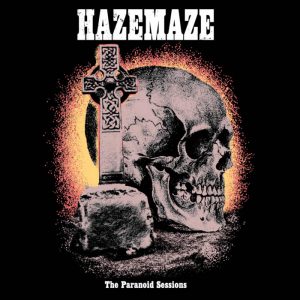 Their last and actual release, done only in limited cassette version ( 50 copies ), and digitally, entitled “The Paranoid Sessions”. This is a 3 tracks EP, where we can find also 3 songs, well-known Black Sabbath classics/standards: “Iron Man”, “Electric Funeral”, “Hand Of Doom”.
There’s no doubt that where the case is similar with many doom/stoner groups, Swedish fellows are also fans of Black Sabbath legacy, and their knowledge of music of British group is clear and probably huge. On the other hand, “The Paranoid Sessions”, brings us practically identical or similar versions of Sabbath songs,  and nothing specially new, we can hear in performing realization of Stockholm’s band.

Hazemaze, honestly play music of Ozzy, Iommi and friends pretty identically, and that’s a reality. “The Paranoid Sessions” will be loved by Sabbath fans, but the Swedish band don’t satisfies with it’s versions as well in final.