One of the serious female artists, whose work has been noticed from the worldwide authorities in last few years is the Haitian born singer Moonlight Benjamin. 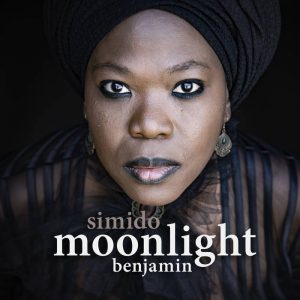 Her attractive personality and music heritage is at the same time original and different from many similar performers, whose concept could be noticed as a world music. Mrs.Moonlight is very active last two years, and after realization of her previous album “Siltane”, with her French band, she toured through many countries and places, and performed at more than 60 gigs.
Moonlight penned the lyrics, where the guitarist Matthis Pascal is responsable for music. Mrs. Moonlight delivers a strong energy, where hypnotic vocalization and aggressive narrative concept describe her stories, where the main themes belong to chaotic Haitian social situation, added with spiritual Caribbean mystical traces. The sound of her band in general, also has accepted many other African influences, as same as existence of natural soul elements as well. 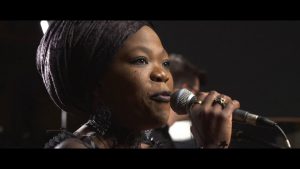 “Simido” as an album is pretty “alive”, with constant rhythm changes, where mentioned hypnotic vocalization of Moonlight, activate a special atmosphere, very rare in nowadays actual music production.
“Simido”, with 10 tracks in, is relevant statement of Moonlight Benjamin and her band, where the followers of so call world music, Afro tendencies and rock approach, could find many thrilling places.