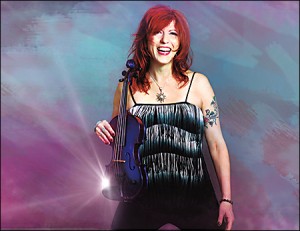 Deni Bonet is a pop/rock singer/songwriter and classically trained violinist who has recorded and performed with R.E.M., Sarah McLachlan, Cyndi Lauper, Scissor Sisters, and Warren Zevon among many others. She was an original member of the cast of the nationally syndicated NPR radio show “Mountain Stage”; singing and performing in her own right and accompanying guests on the show. Deni left the show to pursue a solo career, with a mission to prove that there is more to the violin than concertos and hoedowns.

She has performed at Lilith Fair, Carnegie Hall, the United Nations, and just recently performed at the White House for the President, First Lady and Vice-President of the United States. Deni Bonet has become an in-demand act, headlining various festivals, performing arts centers, clubs, colleges and international venues.

Her music has been featured on HBO, NBC, American Airlines, several film and modern dance projects, and has been described by the Wall Street Journal as like “Sheryl Crow meets the B-52’s”.