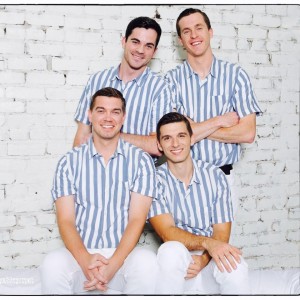 Sounds of Summer: A Beach Boys Tribute is a brand new tribute based in Southern Indiana that includes over 30 familiar hits and tells the story of America’s band – the Beach Boys.

These four incredibly talented guys have known each other since grade school and shared a love of 60’s music and Beach Boys’ harmonies. In 2014, Connor, David, Eric and Matt spent eight months learning and perfecting the intricate musical arrangements for the show before debuting in January of 2015. Sounds of Summer: A Beach Boys Tribute not only has the authentic sound, but also the most authentic look among any other Beach Boys tribute band in the country with all members currently in their 20’s.

In less than a year Connor, David, Eric and Matt have already made an appearance onstage with the Beach Boys and sold out theater performances across Indiana. This show isn’t just fun…it’s fun, fun, fun!