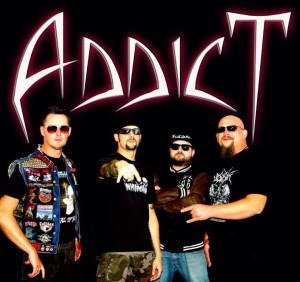 The story of ADDICT… so far!
In 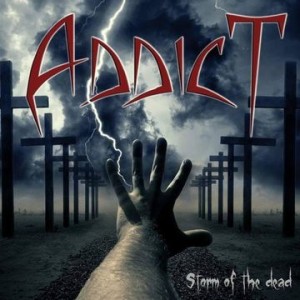 the year 2013 Pat Schöne had the vision to combine the spirit of the 80’ and 90’ metal movement and the smacking
sound of today. He found the right guys to realize his vision. The drummer was found in Ronny Zeche. With him Pat
played over 20 years together in a band called “Never Face Defeat”. A bass player was found in Mike Wiederstein.
Pat, Ronny and Mike played together in the 90’ in different bands. He was also a founding member of “Never Face Defeat”.

The last piece of the puzzle was found in Franco Amenta. A real hard riffing guitar player, who was a founding
member of the metal movement around “Desaster” and his old friend “Infernal”.

In March 2014 the first rehearsal had started and everyone in this room realized …this is it!!
After several short breaks, causes of insurances, the band had 6 songs together at the end of 2014.
ADDICT was ready to hit the studio! In April 2015 they went to the Big Easy Studio in Hennef.
In Frayo, the sound engineer, Addict found a brother in mind! He realized the sound, the band was looking for.
About the lyrics, one thing is to say: Don’t take it too serious!
They are inspired by the typical texts of the 80s.
We are ready for more…