A few months ago Polish label “Zoharum” reissued the UK band  Reformed Faction’s 2004 album, entitled “Vota”. Now, this is completely remastered album, made as a CD, digital, and in a limited edition of 30 cassettes. There ‘s no doubt that “Zoharum” as a publishing house, is slowly but surely taking over the primacy on the world market when it comes to releases of elctronic/industrial/ambient and similar form. 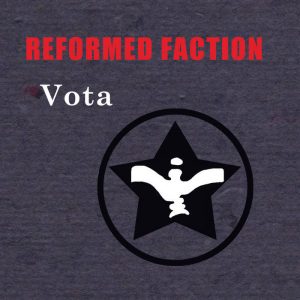 Reformed Faction was a group formed by ex-members of  Zoviet France : Andy Eardley, Mark Spybey and Robin Storey.
After 18 years, this collectible valuable remastered edition still sounds analytically dark-colorful, with the plyer’s motor skills set differently from track to track. Altough it was certainly not the original intention of the members of the UK band line-up, some of the themes present here are reminiscent of the “darker” works of Tangerine Dream, from the second half of the 70’s, of the previous century. On the album, Reformed Faction experimented quite a bit sonically, constantly presenting different,   solutions.
Without a doubt, “Vota” is an album that confirmed the conceptual qualities of the actors of this release.