Mr. Pierre Bensusan is a guitarist with French-Algerian roots, whose activities has captured a long period of career, success and hard work. “Azwan” is his 15th release, album with 12 tracks in, done in his expected mood, whose styles option touches many elements of world music/new age traces, folk and neo-classical details, with additional of jazzy influences as well. 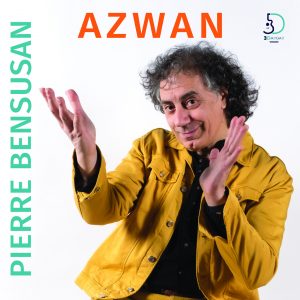 Mr. Bensusan is a storyteller, with original style, voted by “Guitar Player” magazine  readers as a “Best World Music Guitarist. He also won an “Independent Music Award” in 2014. for “Encore: Live” a triple live record. But, that’s not all. Just to remind, his first album he has recorded in 1975, entitled “Pres de Paris”.
“Azwan” is primarily a solo instrumental acoustic album, on which the guitar is conceived as an orchestra, completely delivering  the other part of instrumental additional. At the same time, we can hear many tons from the so call “past century”, as same as mixing elements of more genre’s variations. And all that things reflects a pleasant enjoyable felling, when you come in position, to be a part of dialogue with author and performer. And his stories, of course.
“Azwan” is equally strong release for the lovers of world music tendencies, and to followers of acoustic, jazz, folk and chamber music options as well.