A few days ago, I have received a CD of duo Sambuca, entitled “Luz”, from  press agency “Veev Com” and madam Severine Berger, pretty active in our world of promotional activities. 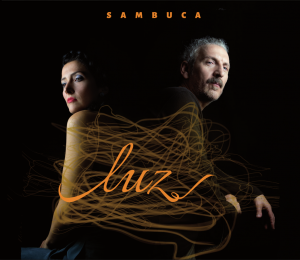 Sambuca are female-male acoustic duo. Irene Amata is a vocalist, and Roberto Stimoli is 7-string guitar player. They have debuted with mentioned album “Luz”, firstly their material have been offered digitally, and few months ago, also in CD format.
Sambuca, in their own way, re-invented and re-capitulated firstly Brazilian musical heritage and legacy, so in their album we can find 8 Brazilian songs, 1 French and 1 Italian.

Sambuca performs presented songs in acoustic way, with jazzy flavor, with specific emotion and authentic feelings. Songs are done in mostly mid or slower mid up tempo, without classical ballads. Even that arrangement creations are more or less done in an original way, presented atmosphere, knows to associate on periods of late 60’s and 70’s. Also, in my opinion, duo has threated a production in older, or old fashionable way. That was their choice in final, and it is evident that Irene and Roberto wanted to relocate their complete film/story from the album in past period.
“Luz” is an album with music mainly acceptable for night-time listening, and recommendable for the followers of older Brazilian sound.