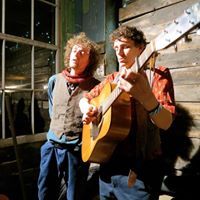 The Brothers Gillespie from Northumberland are devoted to honoring and if possible contributing to the  long lineage and tradition of mystically minded troubadours.  There is a lyrical and visionary power to their songwriting which channels a sense of wild magic, of the mythic aspects of folk culture and the power of place.  There are other ways of seeing that have ran like underground streams through these lands down the centuries.

The folk music came to them when growing up in the hot rebellious summers as an authentic voice hidden in the land, a shining jewel amidst the amnesiac deserts of modern culture. A gift carried to them in time by those magical figures of the 6o’s folk revival who received it in turn from others and a long line backwards into the mists of time of those who carried the gifts against all the odds through their lives. 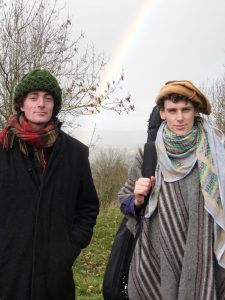 The music became a way of life, an irresistable call, even as their paths diverged and led them to the crowded streets of cities and lonesome flats above convenience stores in crumbling tenements the music was a way to survive, to make a meal busking on the street, or a way to cast forth a defiant joy into a night of rain.

The brothers felt compelled to make a recording of some of the old songs they were singing as a way of deepening their joy in this music which came to fruition in December 2015 with a sold out launch in Hexham Abbey’s Great Hall. ‘Songs from the Outlands’ a ten track album of mostly traditional songs had some great reveiws and led to some extensive touring with the Nest Collective at Shambala Festival, Cambridge Folk Fest, Unamplifire, Festival No.6, as well as numerous folk festivals around the North of England as well as opening for Sam Lee and Lankum.

After a Spring tour of England Wales and France in 2018 playing intimate concerts in many marvelous and hidden places such as Bohemian Bristolian barges, ancient Southern English houses and an anarchist circus of dreams in Paris, the brothers recorded their 2nd album ‘The Fell’ over the summer of 2018 and self released it with a launch concert in Hexham inDecember 2018. Comprised mostly of their own compositions, its an album that has emerged from their experiences living in love with these lands over the last few years and is deeply rooted in the magic and soul of particular places and yet feels the irresistible call of the places over the hill and over the ocean.