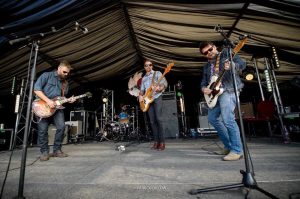 he Rank Outsiders are four seasoned musos cobbled together from the big smoke of Melbourne to The Great Ocean Rd. They love nothing more than the sound of vintage guitars played through fine amplification, a little denim…and a smattering of facial hair.

Schooled in the great deeds of acts such as SRV, early ZZ Top, Freddie King, Clapton, The Allman Bros, Jimi Hendrix, Los Lobos, Georgia Satellites and the original Fleetwood Mac to name a few, the boys deploy a classy trove of their own tunes at every opportunity and can delve into an extensive repertoire of blues and R’n’B covers when required.

Luke Gale carved up guitar duties for national touring act, Custom Kings in the early-mid 2000’s. The devilishly handsome, Paul Winstanley, has been the bass player from hot Melbourne bluesy institution, Spoonful, for more than 20 years. Matty Orchard, a working muso from Apollo Bay, has played more than 3000 gigs all over the nation since moving there in 1999 and Adza, the rock solid back beat of the organisation has kept time for coastal stalwarts, Pressed Rat And Warthog, for many years.

Together they serve a refreshing and irresistible sonic spread. Good time, bluesy rock’n’roll, drenched in classic R’n’B roots…delivered with a touch of mongrel.
Real music. Real players. Cool tunes. What’s not to love?