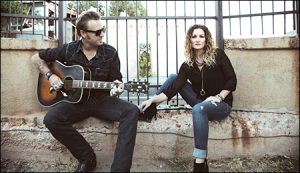 Salmon was an award nominated  rock and roll frontman who’d spent the 1st half of his adolescence in South Africa. During the early 80’s, his family relocated to a longhorn ranch in Texas, where Salmon found himself listening to a cross cultural mix of Bob Wills, Sex Pistols, Marty Robbins and The Clash. He took up songwriting at 15 years old, launched the band See No Evil soon after high school, and later moved the group to New York City, landing a major label deal with Sony Music in the process. A decade later, though, Salmon found himself drawn to the rootsy sounds he’d heard as a child on the ranch, where cattle workers would strum country songs after a hard day’s work. Inspired, he relaunched a career as an alt country songwriter, eventually crossing paths with Seekins, his future bandmate and wife, while playing shows in Sedona.

Meanwhile, Seekins grew up splitting her time between an Alaskan fishing village and an Arizona frontier town. Summers were spent in one location, school years were spent in another. Throughout it all, she honed her talent for dancing, eventually moving to New York during her 20’s and finding success as a choreographer. Unable to resist the need to pursue songwriting, she later headed back to Arizona, where she turned the contents of her personal journal into the lyrics of her very first songs.
Separately, Salmon and Seekins are strong, Sharp voiced musicians, with songs inspired by their colorful and unusual backgrounds. Together, they’re something bigger, a soulful, countrified duo whose music nods not only to America’s rural pockets, but also to the world at large. Appropriately, the group takes its name from the real life Surrender Hill in South Africa, where the Anglo Boer War came to a close. After all, this is a band of songwriters who’ve fought their own battles and suffered their own scars, only to surrender to, and find peace with, each other. 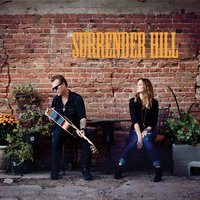 On their 3rd album, “Tore Down Fences”, the members of Surrender Hill unpack the skeletons in their closets, leaning on one another for support. Like the 2 records that came before it, 2015’s self titled debut and 2017’s “Right Here Right Now”, the 2018 release “Tore Down Fences” is an album about relationships, delivered from the perspective of 2 songwriting partners who’d weathered their own share of breakups and missteps before crossing paths. Unlike those previous records, though, this album focuses not on the romantic honeymoon period of a relationship, but on the challenges that arrived before the pair got together. It explores the reality of romance, the good, the bad, the bright, and the dark.

“On our earlier records, it was clear that we were 2 people who’d fallen in love and were writing songs together”, says Salmon, who splits the album’s vocal and songwriting duties with Seekins. “There was a lot of love going on. This new record is interesting because we’ve been together long enough, both personally and professionally, to start exploring some of the darkness from our lives before we got together. We’re focusing on how great it feels to be past that. There’s still a lot of love on this album, but it comes from a darker point of view. It’s about what we went through, what we did, and what we overcame”. 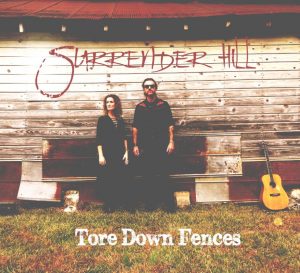 A roots rock album filled with guitars, harmonized vocals, organ, and the occasional burst of pedal steel, “Tore Down Fences” pushes Surrender Hill into harder, grittier territory. All 14 songs were tracked in just 2 days, with Salmon producing the sessions in a Nashville recording studio. The fast pace helped shine a light on Surrender Hill’s talent as a live act, something Salmon and Seekins have been honing for years, with an annual schedule of 200 shows spread across much of the globe. They’ve played bars, ballrooms, American wineries, and South African resorts, often trying out new songs in front of live audiences. “Tore Down Fences” captures that immediacy with tunes like the up-tempo “Get Along”, a socially conscious song, delivered during a politically divisive time, and the slow, swooning title track, in which the 2 singers present all the baggage from their previous relationships. Together, the songs on “Tore Down Fences” paint the picture not only of a band that’s reached its creative peak, but a relationship that’s built on trust, twang, and creative chemistry.

Like its name suggests, “Tore Down Fences” finds Surrender Hill tearing down the boundaries that surround them.