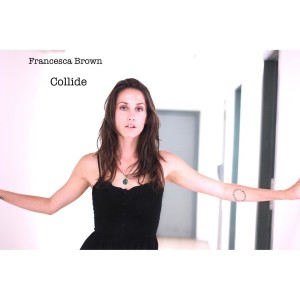 Francesca Brown has been performing around L.A. for the last decade, and during the years she established herself as a certain performer and songwriter.
She has been performed solo and with the other artists too. Her actual album from previous 2016 year – “Collide”, with 10 tracks in, introduces Francesca as a strong singer, where pretty atmospheric songs with emotionally driven phrases are key weapon of her messages. “Collide” as a album combine elements of roots/americana/folk and alt.country as well, where one similar mood is present from first to last song.

Some songs deserves repeatable listeners attention as a for sure  : “Pray”, “Backbone” s/t “Collide” and “The Hallow”…