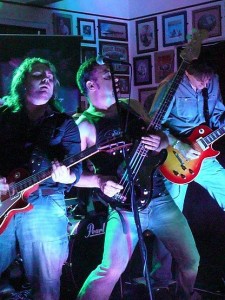 Formed in July 2010 from various members of some of the North West’s favourite bands. Black Rose decided to put a band together to pay respect to the music and legacy of one of the greatest front men and songwriters of all time, Phil Lynott and his band Thin Lizzy. Featuring former members of Renegade, Twin Lizzy, Hare Of The Dog, Metalleeka and Tuscan, Black Rose had a fantastic pedigree before a chord was even struck.

Robert Redfern and Roger Dyson had long been talking about working together, so when Roger left Twin Lizzy, the stage was set for Black Rose to be born. Jason Smith had worked with Roger previously in Renegade, and Barry Lowe knew all members through mutual friends, the nucleus of the band was taking shape and it was time to start rehearsing! Early rehearsals were going well, but as is the norm with Thin Lizzy, one of the guitarists decided to leave, and so after a chance meeting in a local guitar shop with drummer Baz, Scott Broadhurst got the gig to replace Jason on lead guitar. Intense rehearsals followed for the next few months until just before Christmas. The Black Rose live debut came at a 50th Birthday party in Wigan, to a really appreciative crowd of family and friends. 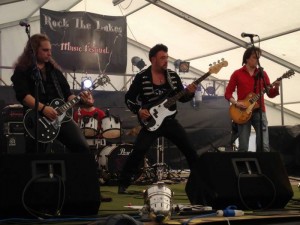 anuary 2011 saw the start of the Black Rose touring machine! The band played all over the North West gaining praise from all corners about their faithful re-creation of the live Lizzy sound, and the highly energetic show they put on to go with it.The start of 2012 saw the band take a little break while drummer Baz was away on honeymoon, but again from February they were back on the road taking their Lizzy show all over the North West, and beyond to some really fantastic venues and audiences!In July of 2012 Patrick Noone joined the band, taking over the drum hot seat from Baz who had decided to leave in order to concentrate on his guitar playing. Joining another North West band Scopyons (guess who they pay tribute to?) And so with that the next chapter of Black Rose was born. Having played in various bands over the years with Scott, the chemistry was already there, and after just one (yes that’s right ONE) rehearsal, Black Rose hit the road again for the remainder of the year. 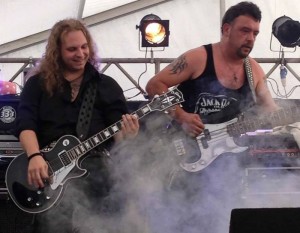 2013 saw the band go from strength to strength, and was the busiest year yet. What with festival appearances, and travelling further afield than before 2013 was certainly the year that people heard about Black Rose.Another line-up change came and went without any disruption. Taking over lead guitar duties from founding member Rob who left to pursue other musical interests was Chris Lord. The band gelled instantly, and the speed in which Chris learnt the set was astonishing. Both for the band,and everyone who witnessed it.

2014 was Black Roses busiest year to date. Festival appearances, special double headers, and sell out shows made it a year to remember. Not to mention an acclaimed appearance at Phil Lynott’s 65th birthday bash at The Button Factory in Dublin – gathering praise from Phil’s mother and a host of his close friends and family.

The band returned to Dublin in August to HEADLINE the Bash for Philo. Something which everyone involved with Black Rose is immensely proud of. On the horizon are more festivals, playing with some fantastic bands, Scopyons, A Foreigners Journey and Oliver Dawson Saxon to name just a few. Also because of the success of the one off show in Bolton with State Of Quo towards the end of 2014. There is a double headline ‘tour’ booked in 2015. A few select dates around the country. All of the info can be found on the gig guide.

In addition to these dates we will be heading out with State Of Quo and Hells Bells on the ‘Classic Rock Live’ tour, taking in various O2 academy’s and other similar venues including Manchester, Islington, Sheffield, Glasgow, Wolverhampton and Bournemouth in late 2015/early 2016.

The demand for Black Rose in 2016 has gone through the roof. We have 40 dates in the diary and we’re only ¾ of the way through 2015! We will be visiting lots of new places, and have some great festival appearances lined up for next year too… Not least a headline slot at Raise the Roof in Bury, a show we opened up this year and was a particular highlight for everyone!