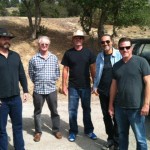 Hillmen performed in a style called Free Improvisation, in which they just tune up and play, with absolutely no predetermined structure, rhythm or key.This style features totally spontanous crwation of music, without the benefit or burden of a written score. No piece of music is ever played twice. The goal of Hillmen is to create elastic compositions that grow, evolve, live and breathe, and change character over time. Where the composition it self become an organic, dynamic being. They beleive that by following this path, their instrumental music can be a literal non – abstract representation of the living world. And a s you listen to their music you really get the feeling that you are sitting in the room with the musicians themselves, watching as music is being created right before your ears! Recorded in Topanga, California, the music on ” The Whiskey Mountain Session “seamleslly blends the styles of jazz, fusion and psuchedelic music fro the 1960′s and 1970s with more modern sensibillities, creating a new hybrid style that ius both traditional and contemporary. Combining the classic sounds of Hammond C – 2 Rhodes piano, vintage guitars and amps, with state – of -the -art recording technology, these four jazzy compositions often begin as a hazy smoke filled space, and than evolve into a new, more clearly seen vision. It’s rather like sailing out on the ocean on a foggy night, and then a majestic island slowly begins to come into view.Which is not suprising , given the fact that the album was recorded in a buetiful mountaintop studio overlooking Catalina Island and the deep blue Pacific’ s Ocean…. All the members of Hillmen have been playing their instruments professionally for more than 25 years each, and it shows. Recorded with a crystal clear around quality, their high level of professionalism shines through in their music.Experienced enough to know when to lay back and not over play, they create music that is filled with strong grooves , beautiful melodies an some truly wailing solos. Free improvisations works best when a group is able to combine the unique qualities of youthful creative abandon, with a deep and mature knowledge of music and mastery of their instruments.And it is towards these goals thet the members of Hillmen’s aspire.