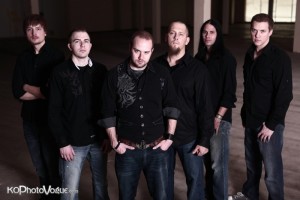 Out of Detroit, comes a 6 piece band Morrow’s Memory. They are a newer act, and during the previous 2011 year, they debuted with full–length, entitled “Moving Forward”. Their album consists of 10 tracks, seriously done, released and performed. We can hear an equalize threatening of vocalization parts and instrumental performing. USA fellows are influenced by the 90′s movement, but in the other hand we can say that they also show some of their own potentials. We can label its music as a combination of emo elements, and rock and hard rock details as well. Songs are mostly done in mid to mid-up tempo, rarely in faster mood. Also exist some ballads, or better to say, half-ballads, where members from the band precisely know how to capture emotional pastiche too, as the album “Moving Forward” covers an equalizing materials, distant arrangements including, and solid production. “Hero In The Dark” is, in my opinion, a track recommendable for often and repeatable listening.