Aguamadera is Argentinian female-male duo based in France, formed by Maria Cabral and Marco Grancelli. They are guardians of South American folk music, but their style touches the traces of nowadays standard too, as same as elements of pop, with additional of world music as well. 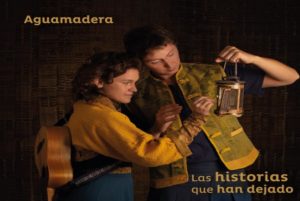 “Las historias que han dejado” is their third album, with 16 tracks in. The duo was formed in 2015  in Buenos Aires, and in 2017, they recorded their first album, entitled “Colocho”. In 2018 they recorded their second release called ” La campana”.
They have toured in many countries as a : Spain, France, Germany, Belgium, Switzerland, and also collaborate with many well-known mostly South American artists.
In actual release “Las historias que han dejado” (The stories they left behind), Aguamadera features songs inspired by multiple genres, such as the : Argentine chacarera, zemba or huayno, Venezuelan joropo, merengue, gaita zuliana, and Peruvian waltz, with the incorporation of the bass and percussian. Most of their songs were done in acoustic mood, with touches of pop and world music elements as well. The atmosphere of the 60’s and the 70’s period in their songs are also evident without a doubt, but duo clearly accepts  the standards of our time. The album was recorded in Buenos Aires under the artistic direction  of Elizabeth Morris, and the collaboration of great South American artists like the singers Raly Barrionuevo and Marta Gomez.  In the following period, in their upcoming concerts, duo will be playing as a quartet, with Julien Rieu de Pey on electric bass, and Vanesa Garcia on percussion. 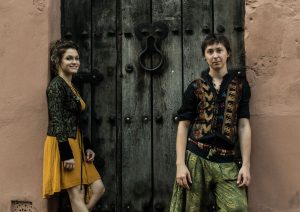 The songs  of Aguamadera are emotive, listenable, even that some of them posses “sad” narrative and same atmosphere.
The duo will be hosted at The Parisian festival “AU FIL DES VOX” at Paris Music Factory on February 16th, 2022.
“Las historias que han dejado”, is available as a CD from January 21. 2022, and digitally from January 7th. Don’t hesitate to face it with their music.