During the November of previous 2021. “Kakafon Records” has released an interesting product, entitled “Vintra Solstico”, done by Kaja & Tetra : Midvintervaka. But, for many listeners and music fans is important to know something about mentioned group and their in many aspects unusual music and message. 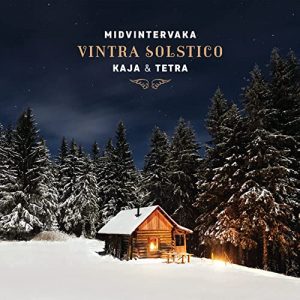 Midvintervaka is created by the two Swedish folk/world music groups Kaja and Tetra. The members are all professional musicians performing in a number of different Swedish groups and projects, such as  :New Tide Orquesta, Ale Möllen Band, Kultiration, Amanda and many others. The first album was released in October 2012. and receive mostly  excellent reviews.
“Vintra Solstico” is folk/world music release, where group in their specific way performs Christmas songs or songs with similar themes. 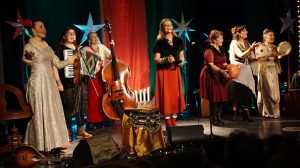 The group took influences from many sources, as a Balkan music, Caribbean, East European, Arabic Greek , Macedonian Swedish, British among others. Many traces and influences Swedish band distribute and create through presented songs and themes. So, we can hear colorful arrangements, rich of nice vocalization and brilliant performing parts. Their music is  full of creativity, and mentioned creativity group mixing with relaxing and peaceful sound. All the technical details, as same as album artwork, deserve highest points. “Vintra Solstico” is also very listenable and pleasant release.