These days, and last few years, worldwide music scene are rich of newer interesting and at the same time attractive and original groups/artists. Some of them brings something eclectic and new, also with enough degrees of quality, other prefers to enter in the sphere of experimentation, where authors messages are mostly in the second plan.But, many interesting things are happens from day to day. 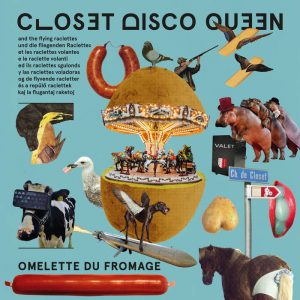 Closet Disco Queen & The Flying Raclettes is an extended version of the instrumental duo made of Luc Hess and Jona Nido.
The band originally started in 2014 as a joke to be a talentless version of mighty Mars Volta.
So, as a team a group has released an album , entitled “Omelette Du Fromage”, with 7 instrumental tracks in, done in frantic version of several mixing genres/styles, as a : psychedelic, noise, garage…In final, we have received from group one interesting experimental crossover, where band members constantly through presented materials have found strange performing combinations and results. Unexpected atmosphere is also one of dominant element, as same as often up tempo changes. A group has offered really interesting and in many places impressive authors ideas, so if your music orientation is close to experimental challenges, Closet Disco Queen & The Flying Raclette are band for your taste.