Before realization of actual debut album, Brandi Vezina has introduced herself with 3 previous singles. I’ve been writing about her work previously, and more or less, nothing specially new Brandi didn’t bring with her fresh full-length, even that all  the positive things, which I mentioned previously, stay here proudly. 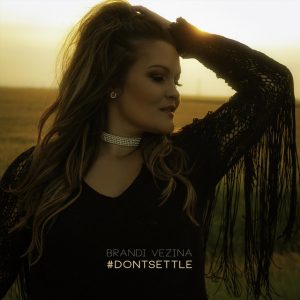 “#Dontsettle” with presented songs focuses on her most personal dating experiences while encouraging women to stand up for themselves in their own relationships, both in their romantic lives, as well as their workplaces. The songs from album are still pretty melodic, with  strong country rock touches, and I would   add with  classic rock and pop moments too. Many things presented here posses so call  memorabilia intentions , and many traces associate on the period of  the 80’s. But, that’s not nothing new, she has announced previously her influences with 80’s legacy.
“#Dontsettle” is professionally recorded and released album, maybe with little more pop touches, but with all others expected presented things, which previously she has delivered in her singles.