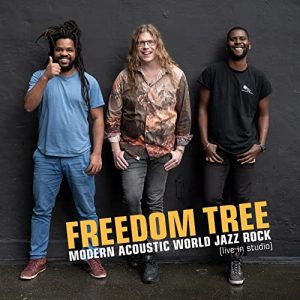 It is important to say, that previously this trio, was known as a group with  little different name – Freedoms Trio, but after the realization of two albums “Freedoms Trio” from 2016 and “Freedoms Trio ll” from 2018, and after realization of several hundred concert, they changed the name in Freedom Tree.
Actual album “Modern Acoustic World Jazz Rock” was recorded “live” in studio during the pandemic days. A band has introduced themselves, as a team who very well know, how to create original sound, under the established music forms, such as jazz, jazz rock/fusion/world music…Their sound also posses enough influences, taken from Brazilian heritage, equally folk and jazz, but through complete presented material, a band knows how to communicate between themselves, and how to create something fresh, and at the same time something new. Their sound posses nice arrangement creations, also is full of performing energy, rhythm changes, and conversations between acoustic guitar and rhythm section. I would add, that melodic traces are also evident in each of presenting themes, as same as virtuosity of all the members from the group. 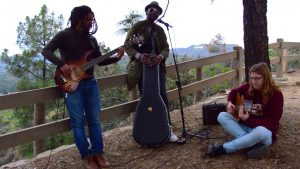 Freedom Tree brings joy and happy emotions when you are in listeners mood with presented themes from their album. This is also the best possible recommendation to find this band and listen to their actual and previous releases.