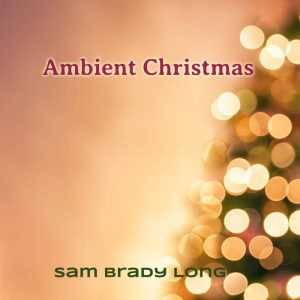 Christmas almost gone, but tradition of  Christmas album realizations exists from the period of the first days of music discography. During the beginning of December of previous 2019 year, artist from Columbus, Ohio – Sam Brady Long has recorded an album with 10 tracks in, entitled “Ambient Christmas”.

Inspired by the ” hum of street lights and the echoes of long, sustained piano notes”, Sam Brady Long has offered his own vision and views of classic Christmas traditional songs and tunes. His works are also inspired by the older school of ambient and acoustic/natural music from the 80’s and 90’s period of previous century. Some traces lead to “Narada Productions”, but I can add that also is evident authentic performing signature. Easy listening and peaceful sound, not typical so call relaxing, is evident here and there, and same atmosphere dominates through complete presented material.

I have received a CD some period ago, so didn’t write a review in Christmas time, but for interesting music and worthy authors, is never too late to introduce a release such this.