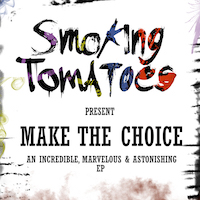 These days, I have received an info from Italian mates, who are members of Smoking Tomatoes band. They are hailing from Rome, and also these days, a group has putted its actual EP on several digital platforms, and asked me to make a review of its material.

Smoking Tomatoes started out its movie in 2013 year, and they are still full of enthusiasm and positive musical vibrations. “Make The Choice”… is an EP with 5 tracks in, where members of band has introduced themselves as a team who like to perform hard rock/metal idioms with funk additional as well. They perform songs in English language, and musically, we can find here and there some influences taken from 90’s period too.

Its songs posses evident energy, with quite certain performing details. Also is evident that presented songs are similar among them. Judging by my opinion, I think that production is more likely to 90’s  period, than to nowadays standards. Smoking Tomatoes has introduced themselves without any calculations or tricks. They are enough raw and unpolished, so there’s no doubt that many worldwide fans will follow them. 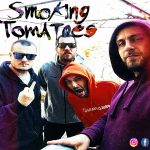