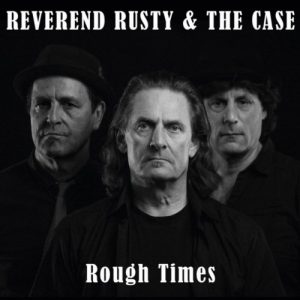 Reverend Rusty & The Case aren’t a new name under the blues/blues rock sky. They have founded in 1984, and till now performed numerous concerts and gigs and also have released a several albums as well.

“Rough Times” is newer one, done in CD, LP and digital variant. This is a full-length with 12 tracks in, penned by leader/frontman/guitarist/singer Reverend Rusty Stone himself. A band works as a trio, I would add explosive and powerful trio, where all the positive aspects in blues/blues rock as a genre are present here and there. Rusty and his team has offered through presented material different variants of blues, rhythm and blues and blues rock elements, added with also some slower tunes, done in maybe more folk and roots mood too. Some of the songs are also more melodic than others, but one coherent performing aspect, followed up complete material. Rusty and his companions are equally infected  by the older and newer genre’s tendencies, and in final, offers interesting creations and results.

“Rough Times” as an album reflects group’s actual music tendencies, and most of the songs posses radio friendly using.