TANTRUM – “Melt It Down” 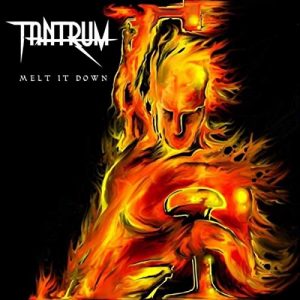 Out of Scotland comes quintet Tantrum, started out its story in 2016 year. From the first days of its career members of the band very well knew in which direction their music will go.

Scottish fellows are faithful to old school variant of hard rock/metal, with 80’s additional and of course, strong received vibrations coming out from NWOBHM approach.

“Melt It Down” is its first offering from 2018 year, available on CD, digital and also in vinyl form, cos’ in March this 2019, LP will be released through “Diabolical Might Records”.

Tantrum as a band performs very precise and distant variant of 80’s hard rock/metal, with melodic guitar lines, as same as skillful vocal choruses. Songs are melodic, but at the same time dynamic with lotta’ performing  energy and sweat. Tantrum are also pretty listenable, and quite certain and convincible on stage. “Melt It Down” with presented material confirms band capabilities and strong willing elements in presenting wanting music form. And that is a good old 80’s hard rock/metal. Enjoy!