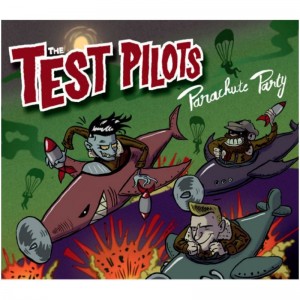 Out of Gothenburg, Sweden comes a trio of well-skilled musicians. During the brief period of existence, first they have released an EP, entitled “Deadly Rhythms”, and after that a full -length with 10 tracks in, “Parachute Party”.

They play mostly   outside Sweden, in Germany and Holland, but they have received respectable  attention in rockabilly community for its work.
The Test Pilots are on the field of neo rockabilly and old school psychobilly tendencies, and play with raw energy and same enthusiasm. Its songs posses a similar qualities and clear genre’s views.