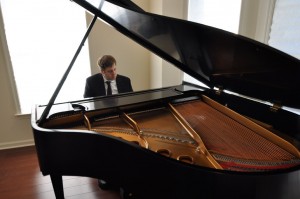 Dave Schlossberg is a pianist from Monroe, New Jersey. A member of numerous musical groups around the New Brunswick area, Dave is an advocate for musical growth within the community. He loves Jewish folk music, but also loves jazz–and composers such as Bach and Chopin.

A graduate from The College of New Jersey in 2006 with a Bachelor’s Degree in Piano Performance, Dave serves as the president of the TCNJ Music Alumni Chapter. He is now the accompanist for many groups: the acclaimed New Jersey Cantors Concert Ensemble; Makhelat Hamercaz, the Jewish Choir of Central New Jersey; Kol Dodi, the Jewish Community Choir of Metro-West; and Kol Emet Choir out of Anshe Emeth Memorial Temple in New Brunswick. He also serves as the musical director for the Music Theatre Program of Middlesex County Arts Middle School.  He is musical director for the Monroe Township Chorus, and the Monroe-based Concordia Chorale, as well as co-director of the Stonebridge Singers of Montgomery, NJ.   Dave works at Anshe Emeth as a Collaborative Keyboard Artist, and accompanies all services, concerts, and special events. He is also a founding member of Tsu Fil Duvids (“Too Many Daves”), a Klezmer band out of Highland Park. 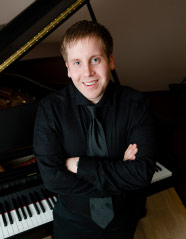 Dave’s compositions of Jewish choral music have also won acclaim.  His “Mi Chamocha” was selected for publication by Shalshelet, The Foundation for New Jewish Liturgical Music and performed at the Foundation’s 6th International Festival in December 2016.  Another piece, his “Etz Chayim,” was selected as the second-place winner of the Ben Steinberg Young Composers Award, sponsored by the Guild Of Temple Musicians.  Several compositions of his have been premiered at the North American Jewish Choral Festival as well.

Dave’s greatest strength is his ability to improvise tasteful, inspired accompaniment for vocalists, instrumentalists, and choirs. He possesses a deep knowledge of the Great American Songbook, and is a gifted improvisational pianist. He credits much of his passion for the piano to his teacher, the late Wally Selick, a highly-regarded pianist from the New Brunswick area. Dave counts Harry Connick Jr. and Dave Brubeck among his influences. 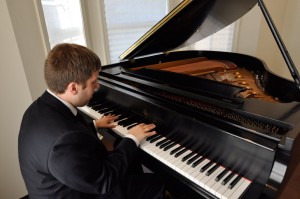