After decades captivating audiences around the world with her signature blend of high-energy dance classics and soulful ballads, Thelma wanted to share a chronicle of her remarkable career with fans, and realized the best way would be through the songs we’ve all fallen in love with—and to—in a lifetime lived in music. The result is a thrilling new band show featuring a non-stop parade of Motown hits with tributes to her gospel roots, the iconic Jimmy Webb (who wrote and produced her debut album), and her adventures and near-misses in Hollywood, culminating in the worldwide success of her all-time disco anthem “Don’t Leave Me This Way.” Backed up by longtime friends and studio legends, Thelma leads a celebration that will take you back, move your feet and touch your heart.

None other than mentor and Motown founder Berry Gordy, Jr., summed it up best after a recent performance: “I LOVE the show! This show needs to be everywhere.”

Born in the Mississippi Delta—whose rich soil may have produced more great music per square inch than any spot on earth—Thelma grew up in sunny Southern California. Like so many artists her earliest musical experiences were in church, but it was her junior high school principal, Mr. “Buck” Catlin, who told her, “Listen kid, you keep your nose clean and you can make singing your living!” 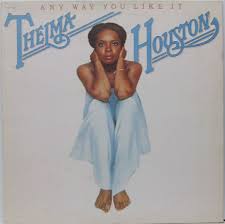 She started out performing gospel with the Art Reynolds Singers, recording “Glory Glory” and “Jesus Is Just Alright,” a new kind of sound—gospel rock—that would soon be made famous by The Byrds, Doobie Brothers, and many others. She signed with Capitol Records (home of the Beatles, Nat King Cole and Nancy Wilson) in 1967 and had her first hit song with “Baby Mine.” Her first solo album, Sunshower, written and produced by fabled composer Jimmy Webb, was a critical success that led to an offer from the top—Hitsville, USA—Motown Records.

Motown may not have produced every hit single between 1961 and 1971—but with 110 top ten songs in that decade it sure seemed like it. Marvin Gaye… Smokey Robinson… Diana Ross… the roster of incredible songs and artists helped change the face of popular music and the country forever. With Motown Records, Thelma claimed the top of the Pop, R&B and Dance charts with her high-powered rendition of “Don’t Leave Me This Way.” That Gold Record classic gave Thelma the distinction of being the first solo female artist at Motown to win the GRAMMY Award for Best Female R&B Vocal Performance in 1977.

Thelma has continued to dazzle audiences worldwide, including appearing before the Pope as part of The Sisters of Glory, performing at inaugural events for President Obama, and electrifying millions of viewers on such programs as “American Idol,” “The View,” “America’s Got Talent,” and many more. She is known for her dedication to humanitarian causes, including tireless efforts in the battle against AIDS and deep commitments to the Human Rights Campaign (HRC) and the Beverly Hills/Hollywood branch of the NAACP. In 2003, the City of West Hollywood named January 29th “Thelma Houston Day” in recognition of her many charitable activities.

With appearances from Tokyo to Las Vegas to Paris, London and beyond, this Diva regularly brings audiences to their feet with her dynamic, captivating show—just this year wowing attendees of the official 2016 GRAMMY after party. The singer/songwriter is enjoying every moment of her success. “I still feel a tremendous excitement about performing,” states the upbeat artist. “I have so many more projects I want to do, places I want to see and fans I want to reach that I have NO plans to retire anytime soon.”