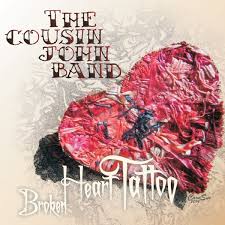 The Cousin John Band is John Mobley, Dave Obrien, Tim Howe and Joe Goltz. CJB music is a hot mixture of folk, country, blues and tight harmony. It tastes just right, there is no genre for this, so its perfect for the band’s irreverent attitude, you could call it americana…..

In live shows, CJB often covers music from artists such as the Rolling Stones, Little Feat, Allman Brothers band, Delbert McClinton, Stevie Ray Vaughn and the Eagles. Original music ranges from country to blues rock, to ballads, and a touch of funk. The diverse mix of music, great sound, and fun atmosphere keep the crowds on their feet until the very last note.

CJB just released their 2nd studio album, “Broken Heart Tattoo”. Fans had waited two years for this project to complete, and it turned out to be worth the wait! The release of the (finally) finished album was a huge success, as the new music had begun to blaze brightly upon the roots-music scene, garnering raves from notable press like That Music Magazine, Middle Tennessee Music Magazine and Musician Weekly.

CJB hopes to complete a series of live videos later in the year, so stay tuned!