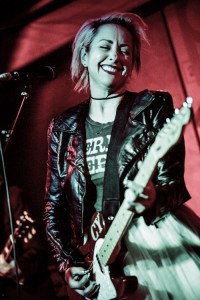 Courtney Yasmineh isn’t necessarily a rulebreaker, she just plays by her own rules. From skipping town out of Chicago as a teenager and holing up in a cabin in northern Minnesota, where she focused an obsession with Bob Dylan into the beginnings of her craft as a songwriter, guitarist and singer, to self-releasing 5 albums and an EP, and doing 9 tours of Europe and a half-dozen in the US (all self-booked, no less), she is simply unstoppable. With each album she’s continued to expand her musical universe, stretching across the spectrum from indie pop to alt-country to full-tilt rock’n’roll, all the while writing better and better genuinely smart songs that are deeply personal yet touch on subjects and feelings everyone can relate to. 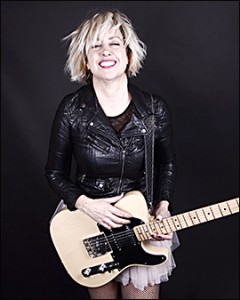 Her latest, the ”Red Letter Day Unplugged” EP, came about in the most organic and unexpected fashion. When Courtney was preparing for a set of East Coast radio station appearances and gigs at relatively intimate venues to promote ”Red Letter Day”, the 2015 CD that is her most electric, straight-up rock’n’roll album to date, it became apparent that bringing her regular backing band to the relatively tiny spaces most radio stations have for performances would be a logistical (and potentially sonic) nightmare.

Ever enterprising and unafraid to wade into uncharted waters, Courtney and her drummer, longtime collaborator and musical director Rob Genadek began rehearsing all-new, stripped down acoustic arrangements of the songs on ”Red Letter Day” as a duo. Reaction to these new versions of the songs was immediate and overwhelmingly positive from all sides. DJs loved them, audiences loved them, and even her bandmates sitting on the sidelines back in Minneapolis couldn’t help but acknowledge the way these gems had taken on a whole new polish and were shining brighter than ever.

Seizing the moment, Courtney and Rob went back in the studio and recorded these new versions of five of the album’s songs. The resulting EP is already being hailed as her ‘breakthrough’ release and has begun to receive national radio airplay.