Now in their 19th year as the WORLDS PREMIERE TRIBUTE TO THE BEE GEES, Stayin Alive continue to tour all corners of the globe with their No1 show dedicated to the magic of the Brothers Gibb.

Astounding audiences in the UK,Europe, Asia, The Middle East and as far afield as the USA with their uncanny likeness and eerily accurate sound. Bill Howard as Barry (vocal/guitar) Jimmy Stanley as Robin (vocal) and Alan Leather as Maurice (keyboards/bass guitar/vocal) continue to rock stadiums, theatres, holiday cruise ships and hotels alike with their faultless recreation of the distinctive vocals and harmony sounds of the Bee Gees, with timeless classics such as ‘How Deep Is Your Love’, ‘Night Fever’, ‘Tragedy’, ‘Massachusetts’, ‘Gotta Get A Message To You’ as well as many others. 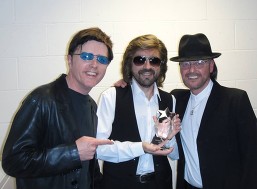 Stayin Alive have enjoyed many prestigious moments in their time together which have included the grand opening of Saturday Night Fever- The Musical at the London Palladium, screened ‘Live’ by BBC1’s Watchdog, Channel 5’s Night Fever with Suggs of Madness, BBC1’s Battle Of The Fantasy Bands with hosts Terry Wogan and Ulrika Johnson and Yorkshire TV’s documentary on Batley Variety Club (where the real Bee Gees had actually played 25 years before) and featuring Maurice Gibb on the programme King Of Clubs alongside them. The band looks set to carry on setting the standard for all others to follow well into the Millenium. In 2010 Stayin Alive UK were asked to record a Bollywood version of ‘Stayin Alive’ for the hit film ‘It’s a Wonderful Afterlife’ directed by ‘Bend it Like Beckham’ director Gurinder Chadha, and in 2013 and 2016 were awarded with a Gold Award for the ”Official UK No.1” Bee Gees Tribute Act by the Agents Association. During their incredible 19 year+ reign as the definitive tribute to the Brothers Gibb, Stayin Alive have won and continue to win fans from all over the globe, who also share their loving passion for the three musical legends that are Barry, and the late Robin and Maurice -The Bee Gees….without whom?.