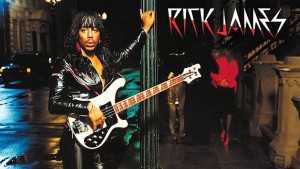 Bio:
Brilliant hitmaker, soulful singer, riveting performer, influential producer/impresario, pioneer in the fusion of funk groove and rock attitude – Rick James was all of these and more. Flamboyant, provocative, charismatic, volatile and always outrageous, he was a consummate artist and a bona-fide star.

Though best known for unstoppable funk jams like “Super Freak” and “Give It to Me, Baby,” his impact is evident not only in the chart stats, but in his artistic contributions as a composer and songwriter. James authored a fleet of irresistible tracks, from club bangers to sumptuous ballads, all delivered with passion and verve. Onstage he was a sequined dynamo and engaged the audience with energetic, theatrical, sexually charged performances, commanding the stage with ferocious authority. And while his own excess ultimately consumed him, hampering the final act of his career and claiming his life, Rick James is now remembered less for his feet of clay than for his grooves of gold.

Born James Johnson, Jr., in Buffalo, New York, he was connected to the music world at birth as the nephew of Temptations singer Melvin Franklin. In an impulsive moment, at age 15, he joined the Navy; justifiably overwhelmed, he went AWOL and took refuge in Canada. It was there that he formed his first band, a rock-soul collective called The Mynah Birds, which at one point featured Neil Young. Changing his name to Rick James, he landed a deal for the band with Motown Records – but upon returning to the U.S. was tossed in the brig for deserting his Navy training. After his release he relocated to Detroit, and though the Mynah Birds dissolved, he maintained a relationship with Motown as a staff songwriter; he developed R&B band The Main Line in England and spent much of the ’70s traversing the Atlantic as he developed various projects. 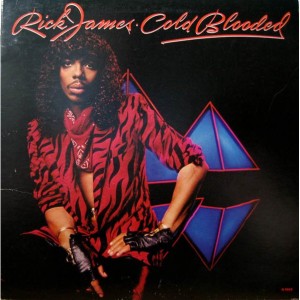 1977 saw him assemble his mighty Stone City Band and step into the spotlight as a solo artist. His debut LP, “Come and Get It,” released by the Motown imprint Gordy in 1978, launched the R&B smashes “You and I” (#1) and pot paean “Mary Jane” (#3). He capitalized on the popularity of the latter tune by assembling a girl group, The Mary Jane Girls, who accompanied him as a warm-up act (as did a young firebrand named Prince) during his tours for subsequent releases “Bustin’ Out of L Seven” and “Fire It Up.” More R&B hits ensued, notably “Bustin’ Out” (#8), “Love Gun” (#13) and “Big Time” (#17). And though his barnstorming jams built his reputation, James demonstrated a mastery of silky balladry as well, showcasing the supple end of his powerful pipes.

riffs, new-wave synthesizer blasts and strutting, lascivious vocals – could at last be fully apprehended. The platinum disc’s rambunctious “Give It to Me, Baby,” a dance-floor hurricane that rivaled anything in the catalogues of peers like Michael Jackson, Earth, Wind & Fire and George Clinton, became a #1 R&B and #1 Dance hit and reached the Top 40, while “Fire and Desire,” featuring his young protï¿½gï¿½ Teena Marie, proved a splendid Quiet Storm ballad and “Ghetto Life,” a formative influence on the “gangsta” style that would evolve later in the decade, was instantly enshrined as an inner-city classic.

But it was the unstoppable “Super Freak” that made James a household name. The frisky funk anthem about a girl “you don’t bring home to mother” shimmied up to #16 at pop, dominating the clubs and attracting a rabid mainstream audience (so much so that James played himself on the hit TV series The A-Team and performed the song in the episode). Unlike many a chart stomp, “Super Freak” never really went away – it became a pop perennial and a must for any hedonistic playlist. 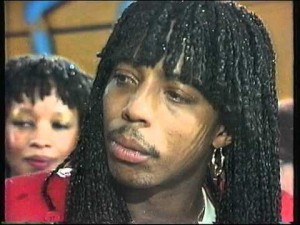 In 1990, as rap music began to penetrate the mass market, the grandly theatrical MC Hammer scored a worldwide smash with “U Can’t Touch This,” a hip-hop cocktail that got its kick from a “Super Freak” sample. Rick James claimed his first and only Grammy Award as the co-author.

The rest of the decade was particularly rough for James, whose drug habit worsened precipitously; his legendarily bad behavior sparked legal difficulties and even a two-year prison stretch. He returned to the stage for a 1997 tour but suffered a stroke that sidelined him more or less for good. Even as his personal troubles captured headlines, James’ work continued to shape popular music; the burgeoning hip-hop scene built countless tracks on the foundations of his songs. Among the best known artists to do so, apart from MC Hammer (who also sampled “Give It to Me, Baby” for his single “Let’s Get It Started”), were Jay-Z, Jennifer Lopez, Mary J. Blige, Busta Rhymes, Dr. Dre, Coolio, Kriss Kross, EPMD, DJ Jazzy Jeff and the Fresh Prince (aka Will Smith), Mya, DJ Quik, Keith Murray, Busta Rhymes and Afrika Bambaataa.

James began to reclaim his reputation in the 21st century, aided by the 2002 release of the sprawling two-disc set Anthology, which at last represented the range of his work to the world. He appeared on Chappelle’s Show to lampoon his high-flying superstar image in 2003, turning “I’m Rick James, bitch!” into a ubiquitous catchphrase. His own final studio work came in the form of a reunion with Teena Marie for her 2004 album. He was at work on a new album and an autobiography when, in August of 2004, he was found dead in his home of an enlarged heart.

Constantly reaching, growing and exploring new aspects of his talent were all part of the genius of Rick James. Since he burst upon the scene in the late 70’s with his unique brand of Punk Funk music, he has been an inspiration to his peers and won the acclaim of audiences and critics alike. James’ left us far too soon, but his legacy continues to inspire new generations of artists to get their super freak on.