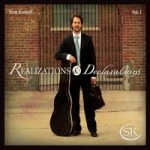 With a rich and melodic sound drawn primarily from his love of 60s and 70s music, New Yorker Scott Krokoff (pron: Crow-Cough) weaves elements of folk rock & country pop into confessional and compelling Americana.  He is an evocative and introspective songwriter, and a deft finger-picker in the vein of James Taylor and Paul Simon with “an edge of Replacements styled alt rock to his strum” (Hiplanta).

Scott’s college band, Equinox, played heavily throughout NYC in the 90’s, releasing four albums before the different members settled into the workforce and “real life” took over. Scott, however, held his dream close and began pursuing a solo career – releasing intimate recordings that documented his passion to persevere with his music. 2007’s A Better Life and 2012’s Realizations and Declarations, Vol. 1 both brimmed with lovely and tuneful revelations that proselytized the art of taking risks in life. 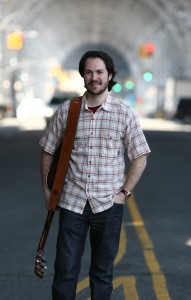 While he has supported his young family as an active lawyer, Scott is adamant that one should never put a shelf life on his or her dreams.  As such, many of Scott’s songs are about not giving up and pursuing what you love.  That belief has led him to appreciate the current state of the DIY music industry, a platform that has allowed him to reach fans all over the world and establish intimate connections with them without placing a time limit on when this must be done in order to have “made it.”

Scott’s latest record, 2015’s Realizations & Declarations, Vol. 2, to be released in September 2015, has thus far received rave reviews praising Scott’s “terrific imaginative powers” (Bearded Magazine) and his “graceful tales of morality and perseverance” (The Vinyl District) with “melodies that’ll have you humming for days” (Nooga) and “music in the vein of 1960s and ’70s songsmiths, but also recalling hot up-and-comers like Father John Misty” (PopDose).  Real Mr. Housewife echoes the sentiment about Misty and concluded that “[i]n a world where so much music sounds similar, Krokoff’s music takes us back to sounds of the 90’s and 70’s with a modern spin that makes us think, relax, and enjoy.”

People of all ages have found Scott’s music appealing, relating to his music not only because of the terrific rhythm and energy each song possesses but because he represents the desire we each have to dream big and live life to the fullest.  One of Scott’s favorite experiences was when his biggest fan flew him from New York to Belgium at his expense to play his 10th year wedding anniversary.  That fan later explained to Scott that he was so inspired by his music, he felt compelled to revive his own musical dreams.  Scott’s situation is proof positive that if you really want to, you’ll find a way.