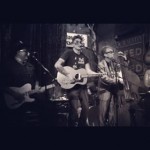 “We wanted to capture a rich and dynamic sound without the use of digital equipment”, describes frontman, and primary songwriter Jesse Adamson, who has been described as “The bastard child of Elvis Presley and Bryan Ferry”.

‘Lonesome Girl’ has hints of honkytonk with deep roots in traditional Memphis rockabilly and although Adamson is the primary song writer, Johnny Vassos (lead guitar) and Howard Linscott (double bass) have a heavy writing presence on the album.

“We made the record after playing together for about 5 months, so we caught the songs while they were still raw. Sometimes you can overthink or overwrite a song if you polish it before tracking it”, claims guitarist Johnny Vassos. 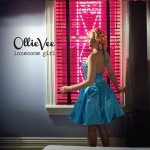 Ollie Vee has recently recruited Adam Perzia as a full time drummer to join the band.

‘Lonesome Girl’ was recorded in Toronto, mixed in both Chicago and Los Angeles, and mastered by 5-time Grammy award winner Gavin Lurssen, at Lurssen Mastering in Hollywood, California. 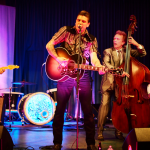 Adamson concludes: “Both of the engineers, Jon Lemon and James McCullagh, who mixed our album, are incredible. Jon works with The Smashing Pumpkins and James with Lucinda Williams. It’s nice to know that you are in such good company. When you hear their work, it is so lush yet they still kept a vintage sound. We’re really proud of the record and the songs have great energy when we play them live”.