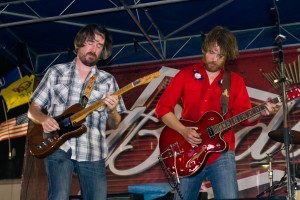 Grand Old Grizzly has been compared to “a ride through a cool desert with a stiff drink in hand”. Fronted by principle songwriter Will Thomas, the Houston-based quartet melds rock, folk, country, indie, and more rock, garnering favorable comparisons to Old 97s, Tom Petty, Uncle Tupelo, Neil Young, and Robert Earl Keen. In its brief time together, the group has generated an impressive local buzz. Grand Old Grizzly has been embraced by respected radio station 90.1 KPFT. Houston Press says “GOG might become your favorite new local band if you have a hankerin’ for Tom Petty and the Old 97′s.” The highly regarded paper recently nominated GOG for “Best New Act” and “Best Folk/Americana” awards.

he band is comprised of seasoned vets who have played in nationally recognized bands. Members of the band have played with such diverse and esteemed artists as Katie Stuckey, Mike Stinson, The Small Sounds, and Beetle, among others. Grand Old Grizzly is: Will Thomas (vocals/guitar), Paul Beebe (guitar/vox), Mark Riddell (bass/vox), Chris Lewis (drums).
GOG has a refined chemistry nurtured from the time its members worked together backing Katie Stuckey. Back then, Will wrote a couple of songs for Katie’s album The Old States that were well received. During a break from working with Katie, Will informally convened the other guys to jam on his other compositions. “Everyone was so prepared. It was wild to sit around for two hours and play my own songs with a band,” he says, recalling that first rehearsal as a bandleader and primary songwriter. Will decided to dub the band Grizzly to commemorate a Katie Stuckey tour moment when—emboldened by margaritas—Will took to calling himself Grizzly. After learning about a few other bands called Grizzly, he changed the name to Grand Old Grizzly. 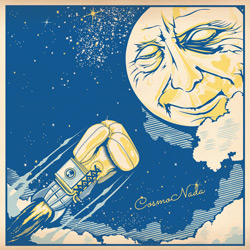 Grand Old Grizzly offers up compelling and literate storyteller lyrics with alt-country flavored compositions. The shitkickin’ hooky “Tallahassee” is a moving vignette about heartbreak on the road. “Sundowners” features high lonesome vocal harmonies, quicksilver country guitar filigree, mesmerizing lap steel, and an engaging snapshot lyric approach. “That song is about when I used to live in New York City and go to this Irish bar on my block. Everyone was friends, but there was one couple that never said hi to anyone and was always bickering. ‘Sundowners’ is how I picture their relationship,” he says. Here Will’s vocals are plaintive with a congenial twang and his words are achingly beautiful. He sings: One more glass of wine/A lovers only kiss/Twenty years of dreaming how did we end up like this/And I’ll say things like, it’s hard to say just what I mean/Oh darling, you’re as far as I’ve ever seen. Other highlights are the breezy banjo-driven “Marvelistic Coward Band,” a playful poke at every band’s self mythologizing,” and the dreamy “Lament.”

The album was produced by band members Will Thomas, Paul Beebe, and Mark Riddell at Beebe Gunne Studio and El Casa Del La Studio in Houston, Texas. Though Will is the primary songwriter, the album greatly benefits from each member’s creative input and the nuanced and telepathic interplay the collective has developed through years of gigging together in various combinations. The album also includes special guest appearances by Hunter Perrin (Thunderado, John Fogerty), Dustin Welch, and Craig Feazel (Small Sounds, Katie Stuckey).
Grand Old Grizzly is quickly building a sizeable live following through its blend of fine musicianship and timeless songcraft. The band has gigged extensively around Houston, and has played shows throughout Texas. A recent highlight was opening for roots rockers Blackberry Smoke at a sold out concert at the House Of Blues.