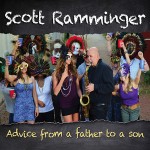 In addition to fronting Scott Ramminger & The CrawStickers on sax and vocals, Scott has appeared with a number of DC area blues, rock, and R&B bands and writes a few tunes as well. He has performed area at venues including the Bayou DC, Hill Country Barbecue, The Bullpen; Cajun Experience, The Hard Rock Cafe, Jammin’ Java, the Harp & Fiddle, 219 / The Basin Street Lounge, Blue Monday at Westminster Presbyterian Church, McGinty’s Pub, The Quarry House Tavern, Chief Ike’s Mambo Room, Dr. Dremos, Chick Hall’s Surf Club, The Austin Grill, Clydes, Bangkok Blues, The Old Bowie Town Grill, Dad’s Pub, JVs, and at the Delaware Beaches at Bethany Blues, Rusty Rudder, the Chalkboard, and the Bethany Beach Bandstand, and many others. . . Instruments, Sounds, Tunes, Etc. The CrawStickers instrumentation includes vocals, sax, guitar, bass, drums, and often, piano. Extra horn players are always a possibility. We pass around the vocal duty throughout the band, and sometimes several of us chime in together. That, along with our ability to cover a wide variety of types of music, is one of the things that gives us some extra zip and helps keep things interesting. We like to mix up the styles, with an emphasis on stuff that makes you want to move. People seem to really dig our set lists, which include a few originals. In addition to our public gigs, we’re available for a variety of private functions, from small parties, to larger more formal events. If you’ve never had a band at one of your parties, you may be surprised at how affordable it can be. Break the “DJ” trend and hire a real, live working band! We’re professional, prompt, courteous, and flexible. What We Do and What We Don’t If you want a set of quiet music — including a bit of jazz, for cocktails or dinner, followed by the livelier stuff for dancing and general merriment — that is certainly a possibility. We’ll bring some music to put on between sets. We’ll play “Happy Birthday” if you need us to. However, if you want or the latest top-40 hits “The Chicken Dance,” “The Macarena,” or anything made famous by a band that wore spandex, we’re not your guys. And we’re not a classic rock cover band. But you don’t want that stuff anyway, do you? You want the good stuff. What’s A CrawSticker? Excellent question. A CrawSticker or “craw sticker” is something that stays with you — sticks in your craw. We also like to think this music will stick in your craw (in a good way). The name is also a vague nod to some of the New Orleans influence you’ll hear (along with a stew pot full of other stuff from Chicago Blues, to Stax/Motown R&B, to Soul Jazz, to Nashville Twang). Finally, it’s a pet phrase around the Ramminger house. For example, Clare might randomly bring up the Valentine’s Day that Scott forgot 20 years ago — or the time 15 years ago he got busy hooking up the stereo and forgot to watch their infant son, who subsequently rolled down the stairs into the basement (no lasting damage). We call something with that kind of staying power a CrawSticker. Here’s hoping our music has the same sort of staying power. But beyond that, this name was available the day we needed a name. Try this. Think of a cool band name and Google it. Likely as not, you’ll discover some speed metal band in the Ukraine is already using the name and has the web domain locked up. Not so with the CrawStickers. (Unless that Ukrainian band doesn’t have a web site.) So there’s one thing in the plus column for the name.