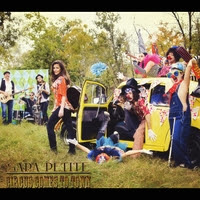 San Diego based singer/songwriter Sara Petite is continuously active practically last decade. With actual one, she has released also a four albums in seven years. “Doghouse Rose”, her previous CD from 2010 year, earned a respectable reviews and recognition in community.
Her actual release “Circus Comes To Town” are consists of 11 tracks in, 10 are completely done by Sara, and song “Barbwire” is a common work with songwriter John Eddie. In her own fresh and also modern way, Sara knows how to combine elements of alt and outlaw country, with so call older school details. In her songs exists many traditional country, bluegrass, rock and roll and even earlier rockabilly details as well. Melody is also middle name of her general songwriting, and listening of complete album materials is real enjoyable thing. “Circus Comes To Town” as the album is full of hit songs, acceptable for radio using too…