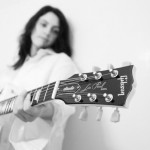 “Stress And The Rhythm Of The Word”, is the second release from Brandy Lynn Confer. (State College, PA, Pitsburgh,PA ). Her previous album , “In The Dust” (2009) helped her to gain some much needed press, develop a small fan base as a solo artist, and gain some attention to her lead guitar playing.

Brandy spent 6 years in Pitsburgh attending college for Radiology and as a multi-instrumentalist in various friends folk/bluegrass bands. In an interview for her college newspaper Brandy explained that, “I was never real member of any group, but I could play a show when they needed somebody and that was really good experience.”

In 2007, Brandy joined the “Myspace generation” in home recording her own songs and posting some of them on the Internet. In 2008 one of those landed in a student film, which got her the attention of music producer Jason Rubal. (Amanda Palmer, Dresden Dolls, Bitter Ruin). Jason has something of a nitche in female singer – sonwriters, but additionally gravitates toward artists who work more from the inside out and are less mainstream. Seventh Wave Studio also prides itself on an honest and organic recording process. What you’ ll hear on any Jason Rubal production is minimal post – editing and is on many cases one complete take. “Stress And The Rhythm Of The Word ” is the result of learning from the first album. It’s a little more “grown up”, both lyrically and vocally. “I am definitely moving forward “.