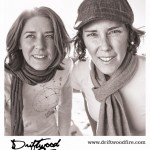 Driftwood Fire is a rarity in today’s media mad world – an organically creative female duo whose vivid songwriting and prodigious playing skills display uncommon artistry. With “How To Untangle A Heartache, Scharf and Formichella present themselves as a formidably veratile and emotionally powerful band on their own terms, with an album that has already received first place in the The Chris Austin Somgwriting Contest, first place in the International Narrative Song Competition, and honerable mention in the Telluride Troubadour Contest, while the duo’s captivating live performances have propelled them to the stages of the National Woman’s Music Festival, the Rocky Mountain Folks Fest, Falcon Ridge Emerging Artists showcase and Far-West Folk Allience Premier showcases. As well as winning them Suggested Artists status in VH-1′s Song of the Year contest.

“We love writing and performing and want to give people an experience that shows down time a hit and encourages them to sit back and catch their breath” says Scharf, ” and maybe find a part of themselves in this music, like we did”.