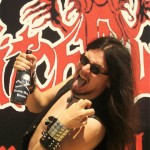 Witchcurse is an old school heavy metal band, hailing from Thessaloniki, Greece that got formed in October 2005 and definitely influenced by the NWOBHM style!

The band was founded by vocalist / bassist POssesses with at that time a different line-up including Father Alex “The Witchfinder” on guitars and L-Drac on drums. A first release was out in 2005, simply called “Rehearsal 18/12/2005″. The band was so promising that they opened for metal legends like Grim Reaper, raying Mantis, Attacker in several local shows! One year after, Witchcurse recruited a new guitarist with Stinky (Ex-Blackjack) after Father Alex decided to quit for personal reasons. With this new line-up, Witchcurse shared the stage with classic & reknown metal bands like Leatherwolf, Manilla Road, and their name was getting bigger and bigger in their hometown & country! They then recorded their first demo called “Heavy Metal Poison” that got very good responses from the underground medias – The curse of the witch was getting stronger & stronger! In June 2008, Witchcurse recruited a second guitarist, with the arrival of Necro, who was playing with Nightskull. Now combining dual axe attack guitars, the perspectives were bigger and greater than ever.! At this time, the band ever played its first gig abroad, as headliner to the Irmandade Metalica Festival in Portugal! November 2008 saw Witchcurse opening for Tokyo Blade and a few weeks later, the band decided to part way with drummer L-Drac that got replaced by Paul playing in Orion’ s Void and Orcus. With this new line-up, they recorded the “Demon’s Warning” cassete-EP, released on “Herege Warfare” production (Portugal) in May 2009. That cassete was well-acclaimed by the underground press and made Witchcurse one of the most interested newcomers of the moment! Shortly after, in July 2009 the band released the 7′ split EP called ” Under The Spell” together with finnish maniacs Witchtiger on ” Metal Warning” records from Finland. That 7′ EP got got amazing responses from the medias and got quickly sold-out!!! These releases opened the road for record deal with “Inferno Records” (France), and ” Heavy Forces Records” (Germany). 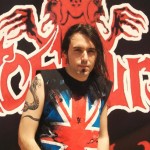 In November 2009 the band released through “Heavy Forces” records the split LP called ” Defenders Of The Past” with Witchunter from Italy and Witchcurse took part to the “Curse Of The Cobra Tour 2009″, for three dates in Germany with metal maniacs Iron Kobra. No need to rest, The Witch was getting more & more excited and released in February 2010 its first official video-clip for the song “Curse The False”, that you know can find on the “Heavy Metal Poison”, released on French label ” Inferno” records,, Vinyl LP on German label “Heavy Forces” Records , and pro-cassete on Greek label ” Dynamite” productions.