THE GARDENING CLUB – “The Riddle” 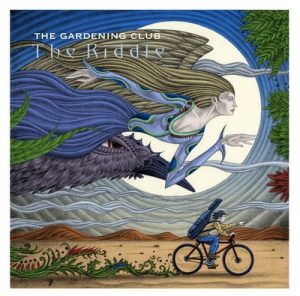 One of  progressive releases, which occupied not only internet media attention, is the album “The Riddle”, creation of  The Gardening Club, band/project fronted by musician, author and well-known illustrator Martin Springett.

Born in England, but resident in Canada, Martin has released in 1983 album entitled “The Gardening Club”, and reissued in 2017. Next year, with his companions  of, I would add serious musicians, he has recorded an album, entitled “The Riddle”.

With nice cover illustrations and 24 pages following CD booklet, Martin and his team has delivered a portion of 70’s alike prog, added with prog/folk and prog/pop influences as well. With interesting lyrical approach, songs from the album knows to associate on earlier works of groups such as a: Strawbs, Camel, Barclay James Harvest, Wigwam, to name a few. Very smooth, melodic and full of different harmonized atmosphere, dominate through presented materials. Songs posses similar ambient, and were done with brilliant arrangements exposures. “The Riddle” deserve repeatable listener’s attention, and specially is recommendable for the followers of  70’s prog freaks.