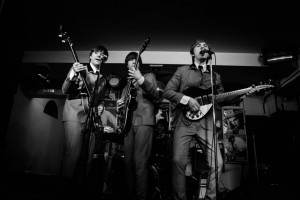 BeatLove is the most authentic Beatles tribute band in Russia. Formed in Moscow by Sergey Rodygin (John Lennon impersonator) in 2013, this band performs Beatles songs mostly of 1963-1966 period with attention to every musical detail and uses the original vintage musical instruments and authentic suits.

In october 2014 BeatLove got an official permission from Sony/ATV Music Publishing for performing The Beatles songs.

In August-September 2015 BeatLove performed on the famous BeatleWeek festival in Liverpool/UK. The band gave an 11 gigs on different stages including the legendary Cavern Club.

All the band members are professional musicians who have been working on Moscow stage for years.

BeatLove is a frequent guest on different parties, presentations and corporate events in Moscow and beyond. Frequently appears on local radio and TV.