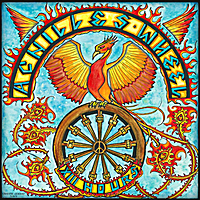 Achilles Wheel is a relatively new band, fronted by 2 persons/authors – Paul Kamm and Johnny ” Mojo” Flores. The 13 songs from its debut album were recorded in precisely 13 hours, live at historical “Nevada Theater”, in downtown Nevada City, CA. In best possible way USA act combines jam rock options with roots music legacies. Their performing variants also absorbs a psychology of 70’s period, and some influences leads to the groups as a Allman Brothers, Grateful Dead, and Little Feat among others. But, even that band introduces themselves as a act with raw and in the same time convincible performing energy, its songs are more than so call standard jam rock tunes/themes. “13 Hours” on the other hand are consists of equalizing materials, with positive, pleasant and also enjoyable atmosphere, without less interesting moments. Fine work and recommendable peace of music too…