Out of Wien, Austria comes a quartet named Baits, whose career is actual a few years. Their debut album from 2021. “Never Enough” has received important national and international attention, as same as worldwide airplay. 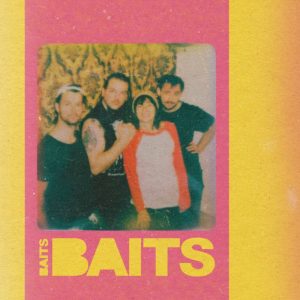 The group with nice female vocalist Chefiza Sonja Maier likes to release their music on cassette, and actual  EP, entitled “Bring Your Friends”, we can find on mentioned format, as same as a digital version.
“Bring Your Friends” with 4 tracks in really reminds in many aspects on periods of the 80’s and new wave days. Melodic lines are strong, as same as including of power pop details and grunge variants as well. As I can read and see, many critics and journalists threat them as a sort of grunge act, but grunge as a style is only the part and not too big part of their exposure.
“Bring Your Friends” lasted little less than 10minutes, but fresh energy, intense melodic lines repeatable refrains, and in final pretty listenable songs, are strong weapons of this Austrian act.