Natural Blues is another long-standing band /project fronted by leader , guitarist, pianist, vocalist Mr. Norbert Eager.
Before a realization of “Elementary Power” album, a group has released an EP, with key song – “Shame On You,Mr.Tramp”. 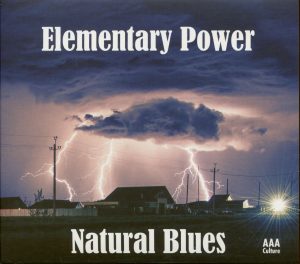 Nature Blues as a band is consisting of real professionals and experienced musicians, and we can not expect something uninteresting  with this team, so actual release with 14 tracks in, is an  album, where several blues tendencies crossing together in one circle.
All of the songs except traditional “Fishing Blues”, penned by Norbert Eager. Natural Blues posses something of old-fashion style, but with strong energy of each member, modern production work and natural/experienced musicianship,  and all of the mentioned things guarantee positive vibrations and good feeling, when you are together with the themes from the album. Classic blues elements, electric approach, Chicago blues including, some country blues traces, that’s the genre’s variants, which band has been reproduced on “Elementary Power” album. Norbert and his team are as I also mentioned in my previous review of his work, are selection of mainly “best of” blues from Germany. Take a time, and if you are still not familiar with Norbert works, don’t hesitate to test yourself and find something interesting, and  also good.