For the die hard followers of so call newer tendencies under progressive as a genre, Swiss fellows from group Galaad aren’t unknown to them and wider society. The group has had a tho phases in their career.Formed in 1988. in Moutier, in the Swiss Jura, Galaad  finished at the beginning of 97, leaving two  albums, “Premier Février” in 1992 and  “Vae Victis, in 1995.” . They have started up again in 2016. and in next year, during the 2017. have released an album,. entitled “FRAT3R”. 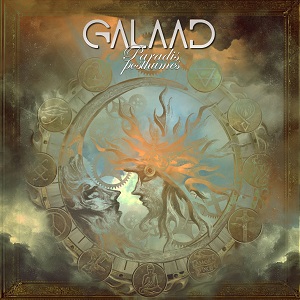 “Paradis Posthumes”, a newer product with 11 tracks in, a group has released at the end of March this 2021 year.   Swiss fellows performed their songs in French language, and their style, one sort of mixing combination of newer and older progressive tendencies, is actual in new album too. A group, judging by performing duties of  its  members, deliver one hard progressive groove, where often up tempo changes, and usual transformations from quiet to louder parts, are practically presented from first to last song. There’s no doubt that all the members from band are well-trained instrumentalists, and  musicians who also knows how to create an interesting arrangements.
I have mentioned that group combine newer and older tendencies from progressive as a genre, and influences taken from the periods of 70’s, 80’s and 90’s years are evident. Very modern production work, and clear melodic traces are also strong weapons of Swiss group.
“Paradis Posthumes”as an album,  is optimistic  come back, and group has offered  a well-done work.