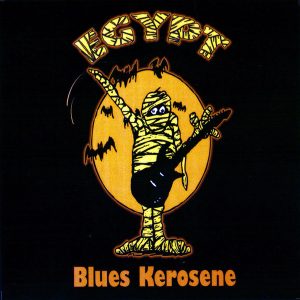 On Thursday 17th of October audience in Belgrade will have a special honour to see alive a British blues act Egypt, whose members are on the road more than 50 years. Also known in worldwide music world as a former members of mighty Groundhogs, with respectable experience and performing knowledge, mentioned trio, formed back in 1987, will introduce themselves in “Bluz & Pivo” prestige club, where visitors also can see a support group – Nikola Čubrilo Band. Belgrade fellows will open the show with their own materials and about 45 minutes of music.

Egypt as a band is  constant on tour in UK, Europe and abroad, with not so big following discography.
In 2013 year, group has released live album entitled “Live In Jena”, Germany (Stable Records), but latest studio product was “Blues Kerosene” album, with 10 tracks in, from 2010 year.

I think that real face of its musical knowledge and message, Egypt as a band has delivered on mentioned release. And this is one pretty expecting version on British blues/blues rock variant rooted in 70’s, but with performing energy of our time. Egypt are also explosive trio who knows to remind potential listeners on best era of British blues period (mentioned 70’s), and its sound combine elements of blues rock, boogie, hard blues, and specially is interesting its versions of songs of well-known blues legends. Atmosphere, tempo changes, intuition and improvisation elements are also important details of group’s performing exposure. There’s no doubt that Egypt as a band and especially if you are a fan of British blues school, is act that you simply must see on stage, and audience in Belgrade have a nice opportunity to be a part of the show. Egypt will promote its own blues movie, so be a part of this event…