King Of The Tramps (USA)

King Of The Tramps is an original roots rock group, whose sound calls upon influences from modern 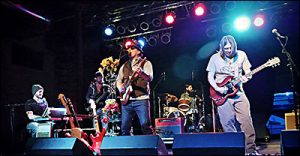 King Of The Tramps live show is a foot stompin’, hand clappin’ rock and roll gospel, with plenty of crowd participation. According to City View, show reviewer Chad Taylor, Todd Partridge is ‘part troubadour, part tent revival preacher, he holds court over his audience, welcoming all to the Tramps roots rock and jam band sound with the charisma of a faith healer”.

King Of The Tramps takes its name for a lesser known 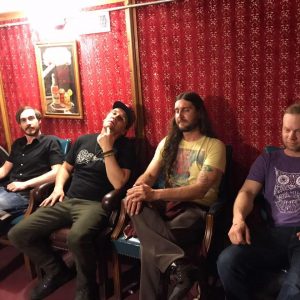 rail legend, ‘Tex,  King Of The Tramps’. Tex rode the rails across the US in the 1930’s and 1940’s often leaving his mark ‘Tex K.T.’ carved into bridges, fences and buildings across the US.

With “Wild Water, the 5th album from Iowa roots rockers King Of The Tramps, the Tramps blend rock, blues and r’n’b tendencies without losing site of the ‘whiskey gospel’ sound that has made their live show a favorite. The Whiskey Gospel Horns (Andy Poppen, Aaron Ehrlich) and Motown backup vocals (Sarah Nevins) add polish and shine to the gritty midwestern working class sound.  The album features 10 songs. Official release is set for August 2nd, 2019.