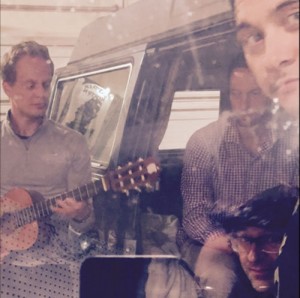 Hailing from the blue collar, hockey town of Edmonton, Canada, the recently 3 piece Ground Level Falcons have seen their fair share of changes in the last year. One of the founding members, lead guitarist Adrian Armitage, left the group for family reasons this past July. Adrian’s replacement, Brent Whitford, tragically passed away a month later, he was only 33 years old. The album release was in tribute to Brent. He was a type 2 diabetic, the cause of his passing. On a side note, the band will be donating any online LP sales to the Canadian Diabetes Foundation moving forward.

Another founding member, bassist Greg Kolodychuk, took a leave of absence from the group after the release of the latest album “The New Wilderness”. Greg is getting married in mid October, him and his bride to be are expecting their first born in early November. 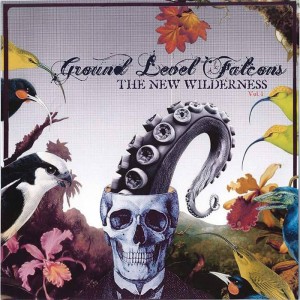 Despite all of the real life, behind the scenes changes, the band has managed to release their 3rd full length album since 2012, an album the band firmly believes is it’s best release to date. ”The New Wilderness” is an 11 song album that deals with 11 common fears that everyone feels at certain points in their life. It is an album about confronting these fears and working past them to get to a better place.

Each album has seen Ground Level Falcons add and remove certain aspects or instrumentation, this album got back to a more traditional rock line up of 2 guitars, bass and drums, however Adrian stepped up and added backing vocals in all of the songs.

This album also saw the debut of Adrian and Greg as songwriters with “I Meant To” and “Miles Away” respectively. “Memory Man” is the first track and it really sets the table for the listener with a simple, but hypnotic chord progression. Track 5, “Bring It Up During The Nighttime”, is a track that the band is well known for in the live setting. It will take the listener on a colourful journey, it makes the perfect over the hump midway point in the new album.

Ground Level Falcons have become known for their moody, downbeat, minor keyed alternative rock that pulls from Queens Of The Stone Age, Neil Young, R.E.M., Pearl Jam and Nirvana. ”The New Wilderness” is definitely a tremendous culmination of all of these influences coupled with the fact the band has been playing together for over 5 years now.

The album plays wonderfully cover to cover and is meant to be listened to as such. Great care was taken in the sequencing of the songs in order to tell the story in the most engaging way. Now that the newest release is available in Canada, Ground Level Falcons plan on releasing ”The New Wilderness” throughout Europe, Japan, Mexico and Australia in the final months of 2017 and in to the spring of 2018.